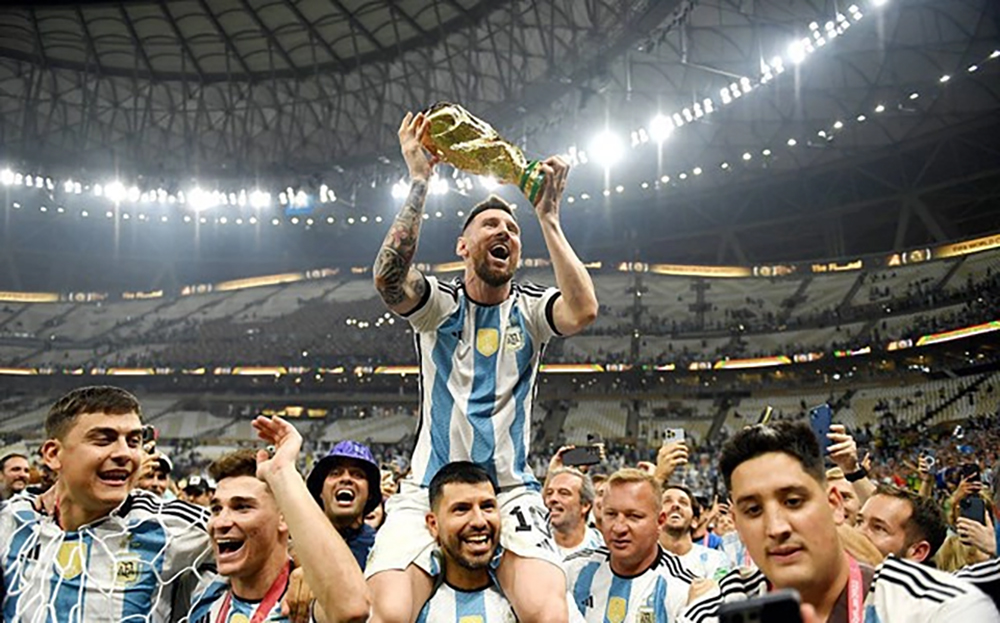 For Messi personally, the 2022 World Cup final is the most memorable night when his biggest dream became true, the World Cup gold cup is in his hand. The seemingly endless debate over who is the greatest player between him and Cristiano Ronaldo seems to have the perfect answer.

In the 2014 World Cup, Messi was only a step away from the cup. His distant gaze at the cup at that time made people realize how cruel football was.

But on Lusail night, in the presence of nearly 90,000 spectators, M10 touched the cup, and happily gave a kiss to the reward he had been pursuing for nearly 20 years, with his teammates raising the number 1 symbol of football in extreme excitement and joy.

It is a worthy result of Messi’s tireless efforts. He scored 2 goals, the first being in the opening phase, before bringing the important goal in extra time.

When stepping up to take the first penalty, the Argentina superstar calmly fooled goalkeeper Lloris, opening a decisive victory for La Albicelestes.

In 7 matches at the 2022 World Cup, he has scored 7 goals, more than the total of 4 previous World Cups (6 goals). In addition, he also had 3 assists. His brilliance helped him win the 2022 World Cup Golden Ball for the best player of the tournament.

Messi is like the savior of the Argentina team. And he will not stop after the 2022 World Cup. The reigning World Cup champion affirmed that he will continue to play. He wants to wear a shirt with 3 stars, symbolizing the 3 world football championships, for as long as possible.

One of the reasons why Messi has not considered retiring from the national team is coach Lionel Scaloni, also Messi’s teammate in the 2006 World Cup. It was he who helped Messi open a new era with La Albicelestes, after winning the Copa America 2021, ending the 28-year title thirst of the South American football power.

Scaloni, 44, is the youngest coach to lead Argentina to the World Cup, after the legendary Luis Menotti – who brought La Albicelestes to the top podium of the 1978 World Cup at the age of 40. In September, Scaloni completed a contract extension, leading the team until 2026, the time of the World Cup in North America. The Argentina team that he worked so hard to build, became more trustworthy with the fans and will enter the tournament in the next four years as the champion.

In Qatar, besides Messi, the Argentina team also opened a “bumper” season: goalkeeper Damian Martinez won the Golden Glove, becoming the first South American to win this award in the World Cup.

In the final, he not only successfully saved a penalty but also blocked the shot in the face of the French striker at the end of extra time, greatly contributing to the victory.

In addition, in the Argentine team, there are many players worth mentioning. 21-year-old midfielder Enzo Fernandez was in excellent form throughout the tournament, winning the Young Player of the Year award. Old General Di Maria scored in 3 finals Olympics, Copa America, and World Cup; young talent Alvarez scored a double in the semi-finals or a new but notable figure Mac Allister…

Argentina’s atmosphere of solidarity and strong will was also impressive. This is the 6th time they have won the penalty shootout in the World Cup, setting a historical record.

The fighting spirit and unstoppable will of the Argentine players were shown after the loss to Saudi Arabia in the opening match. They became the second World Cup champion in history to lose their first match but win their last, after Spain in 2010.

Talking about fighting spirit, it is impossible not to mention Kylian Mbappe. At a time when everyone thought Argentina had won, the striker was about to enter his 24th birthday. He made an unbelievable double in just 97 seconds. He completed his hat-trick in the 118th minute, becoming the first player to score three goals in a World Cup final since 1966.

Despite failing to help the French team defend the World Cup title this time, Mbappe once again proved his level, worthy of the “next generation king” of world football.

France lost, but Mbappe didn’t. He has scored 8 goals in a World Cup, is the World Cup Golden Shoe with the most goals after Ronaldo in 2002 (also 8 goals). He scored 12 goals in just two World Cups, only 1 goal behind Messi. It was only a matter of time before he surpassed Fontaine (13 goals at World Cups) to become the number 1 striker in the history of the French team at World Cups.

When the sunset is falling on Messi’s back, it is also the time when the dawn greeted Mbappe.

The 2022 World Cup final deserves to be a classic match in football history and can be a milestone marking the turning point of a new generation.